The Working Kelpie Council of Australia

Background To Sheep Dog Trials
The claim ‘mine is better than yours’ so commonly used down through time resulted in 'matches', 'challenges' or competitions between individuals which were gradually extended and became the basis of the competitions which are now firmly entrenched as sports throughout the world.

Historically it is difficult to decide when, what and where the first official sheepdog trial took place. Bala in North Wales is usually quoted as having conducted the first trial on 18th October 1873. Halsall 1982 ‘Sheepdog Trials’ sights the first trial in Scotland in the early 1870s at Pentland Hills won by James Gradner's Sly ‘..(a pretty little black and tan bitch with a strong 'eye'). Sly was particularly good in the outwork and at the shedding and she earned 1 pound in beating a big black dog handled by a local man, Robert Russell. Sly ran second at the West Linton trials a year or so later.’

The Bala trial was held in October, 1873. at which 10 dogs were entered and the trial comprised two separate tests of gathering, driving and shedding over course distances of 500 and 800 yards. In the first test three Welsh mountain sheep were released from ‘.. the arms of the sturdy Welshmen who had charge of this portion of the entertainment; while at the same moment the performing colley (sic) was turned off by his master, and man and dog used their endeavours to drive the wild and unruly beasts into a small pen with an entrance of about six feet wide, situated at some 500 yards distance from the fold whence the game started’ [The Field 18/10/73] 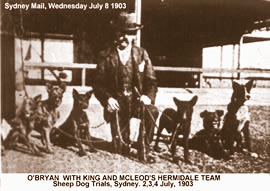 The 4 most successful dogs from the first test were selected and took part in a second trial which required to cast out and gather three fresh sheep liberated some 800 yards distant and bring them through a gateway to his master..

The trial was won by Jamie Thomson working the Scottish-bred Tweed...’a small black and tan dog, with a white forefoot, very compactly built, with an intelligent foxy head and fair coat.’ who..’had already won a special prize in a contest for the best looking competitor’

The following are extracts from the 'The Field' describing Tweeds two runs. Tweed ‘... soon showed us what ought to be done and the way to do it, commencing leisurely, without frightening his charges, and swinging easily outside of and well away from the three sheep - not by any means an obliging trio.

He, with very little human aid, got them right up to the pen, past which they rushed at best pace, but the canny Scot, put over a wall by his master - a bit of a swagger, some thought headed them unseen, and quickly returned the sheep to Mr Thomson..............'Not caught yet' though; for, resisting human attempts at imprisonment, the next instance saw them up the rocks and into the crowd, favouring in one way the dog by keeping together,.............. Tweed soon had them down, displaying great pace and wonderful obedience, and in fourteen minutes all three were popped in, amid loud cheers.............’ In the second section Tweed's run is described ‘.....started from the crown of the hill, at once saw his three sheep, who had run up to the top hedge of the large grass field where they were turned out, and, going at a tremendous pace, brought them without a check straight down to and through the required gate, dropping to a signal at least a hundred yards away from his master .....’

Sheep Dog Trials In Australia
Competitions between owners of sheepdogs has been a part of Australian pastoral history for over 100 years - with trials being held in Australia earlier than the 1873 Bala trial. Whilst the sport was developing in both countries at roughly the same period of time - the course and test requirements were developed differently. In the U K the trials appear to have been conducted on the commons and the dogs required to work 3 and later more commonly 5 sheep with a driving and shedding component. 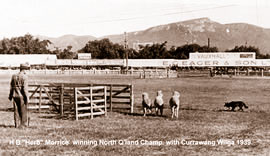 1881 Forbes Show and third annual sheepdog trial- August 1881. (p4 Parkes and Forbes Gazette.) ‘The sheepdog trials was far the most interesting part of the whole show, came off on Friday and drew together a very large concourse of people, fully 600 being present, who watched the wonderfully clever dogs and sagacious evolutions of the dogs, with great interest. All the dogs worked splendidly, and the judges Messrs Govan and Dent, had difficulty in deciding as to their merits - the marvellous way in which the well trained animals worked the sheep being a treat to witness - The result of the trial were as under:. All aged dogs. 1st 5 Gns, 2nd 2 gns. H King's Clyde and C S Gibson's Grand Flaneur equal. R Townsend's Laddy, H King's Moss, C W Brown's Young Moss, and G Thompson's Dick competed. Puppy Stakes: R (H) King's Clyde 1. W L Garrard's Tweed 2., W Townsend's Laddy and C S Gibson's Mata tied for 3rd. Some amusement was occasioned on Saturday through Grand Flaneur and Clyde yarding Turkeys and Fowls.

The intelligent brutes worked them quite as well as sheep and the latter afterwards managed to drive them home to Osborne. He also shepherded and penned a chicken. Such animals must be invaluable to their owners, and no wonder they are highly prized.’

Early Rules & Courses For Sheepdog Trials Within Australia
By the 1880s sheepdog trials in Australia had become a popular sport. It has yet to be established exactly when a standardised course was generally adopted in Australia. Until the formation of the Sheepdog Workers Associations it appears that the organisers drew up their own course; tests and rules. This was certainly true for the trials conducted at Sydney firstly by the Agricultural Society and a little later by NSW Sheep breeders.

The rules and regulations for the events conducted on the Sydney Showground in conjunction with the Easter Show 1891 for instance provided 2 classes- the first for ‘Dogs or Sluts (any age) ‘ and the second for ‘Puppy Dog or Slut (under 12 months old’ were as follows:-

In heats of 1897 trial the second conducted by the NSW Sheep breeders Association. The dogs were required to ‘round-up 3 sheep’ and put them through 2 passages between hurdles 4'6’ apart and then into a yard within 10 minutes. In the finals the time was extended to 15 minutes and 2 poles positioned 5 feet apart was substituted for the second set of hurdles.

In 1901 the course had been altered and the dogs were required to put their sheep between 2 hurdles, thread the cross and conclude with the yard. The trial in 1903 drew an entry of 34 dogs and ‘.. an appreciable improvement instituted on the suggestion of Mr Walter Suttor, was a small pen to hold the sheep, in place of the old style of holding (the sheep) before the start. Mr Suttor also clipped the wool from around the eyes’ The course that year was:- round 2 flags, through the hurdles, round a 3rd flag, through the cross in two different directions and holding in a pen.

A record of 40 entries was received for the 1904 trial and the course changed. The Maltese cross and hurdles were replaced by a race and bridge similar to those in use today. The race and bridge ‘.....proved altogether too much for the workers, or the majority of them at least. The sheep seemed to be afraid of these obstacles, owing, some sheepmen contend, to the battens being painted white instead of some sombre colour...’ The idea that sheep re-act adversely to white appears to have been generally supported at that time.

The King and McLeod owned Hindhope Jed a black, tan and white imported bitch even had her white markings dyed to help overcome the unsettling affect her white had on the sheep!!!!. 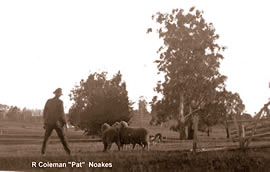 Workers were not restricted to using a 'pointer' of a maximum length. In several photos the workers seem to be using long handled whips- and there is a written account of the accidental cracking of the whip by the handler upsetting his dog. Early photographs show the worker positioned very much closer to the obstacle than is permitted today. The regulations for 1903 stated ‘.... Pegs were fixed at the hurdles and cross; inside these pegs the 'handlers' were not supposed to go, but several did and helped their dogs unblushingly. The pegs were discarded for the final.’ References to the handler being cautioned for being too close and giving his dog too much help at the obstacle are often encountered. That the assumption was sometimes wrong is exampled in the newspaper write up of the trials at Wagga 1898 In describing Coil's run in the finals the journalist went on to say - ‘...and landed right opposite the gate of the pen, but breaking around the old champion, Coil was up to his work and soon had them again with their heads into the gate of the pen.

The judge here thinking Jack was too close and may render his dog assistance, called out to him to keep away from the pen, whereupon he turned and walked right away, and the champion sheep dog of the present day when left all the responsibility, with an excellent move, landed the sheep safely into the pen with a half a minute to spare, ....... ‘

Obviously 'crossing' was not a disqualifying fault in the early days - Earlier in the description quoted above Coil ‘.... was a bit eager at the start and ran between his sheep, but then bunched first class.....’ There are frequent references to dogs crossing and still gaining the maximum 100 points. Research material to hand describing various country trials conducted in conjunction with Pastoral and Agricultural Shows suggest that the Maltese cross was not part of the course. In most cases there appears to have been 2 sets of hurdles or 'gaps' and a pen. The time allowed was usually 15 minutes but this was often reduced to 10.

Although not yet fully researched- one of the first NSW references to the existence of a Sheepdog Trial Workers Association is 1927. The Victorian Association was founded about this time and has an uninterrupted record of service to the sport whereas the NSW association went into recess during World War 11 and was reformed again after the war. The course now in use in NSW is very little different to those used at the Sydney Sheep Show Sheepdog trials following the deletion of the Maltese cross in 1904. There have however been a number of changes to the rules and the way the trials are judged and points allotted. Owners currently interested in Sheepdog Trial competition could contact their State Sheepdog Workers Association for copy of up to date Rules and Regulations.